19 Nov '18
It's raining money for startups, but only for the promising few
Share on:

It's raining money for startups, but only for the promising few

In the past nine or ten months, the valuation of vernacular startup ShareChat has gone up seven-fold, from $67 million to $460 million. As the firm has reeled in users — 10 million at last count — there’s been something of a stampede by venture capital investors to get a piece of the action. Typically, this would be the time when the early investors would cash out and move to their next round of bets.

Breaking from convention, India Quotient, the early stage investor in ShareChat, isn’t quite doing that. The Mumbai-based investor that counts Lending Kart and Loan Tap in its portfolio, is holding onto its shares in key investments such as ShareChat, taking even bolder bets on standout ventures that it thinks can provide outsized returns.

“Earlier we would tell our LPs (limited partners, the companies or people who invest in venture funds) that we will aim for a 4X return,” says Anand Lunia, co-founder of India Quotient, an early stage VC. “Now, with our latest fund, we’re bolder and more ambitious and think a 10-fold return isn’t impossible.” 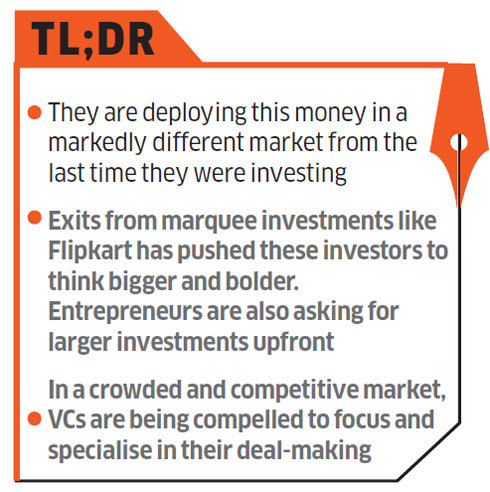 India Quotient is among a raft of venture capital funds that have raised fresh India focused funds in recent months, foretelling a wave of dealmaking in coming months. But crucially, the thinking on investment, exits and returns is different this time.

For one, Flipkart’s blockbuster acquisition by Walmart has opened up new horizons of possibility. Also, the pool of able and hungry investors has expanded considerably, especially with large Chinese investors getting serious about Indian startups.

According to data from Tracxn, a tracker of deals, the amount of VC investments in India crossed $2.6 billion in July-September 2018, compared with just over $1 billion in the year-ago quarter. This spurt of investments says industry watchers, is powered not just by well-known VCs such as Sequoia and Accel (by some distance the most aggressive investors in Indian startups), but also newer rivals for these deals, including those founded by former heads of the India offices of these marquee names. 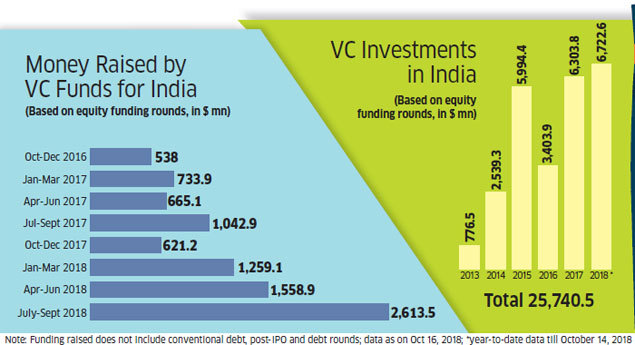 A few billion dollars in fresh funds from smaller homegrown units are also in the fray. Recently, new Asian investors such as Meituan and Shunwei have also made deep inroads into the Indian market. 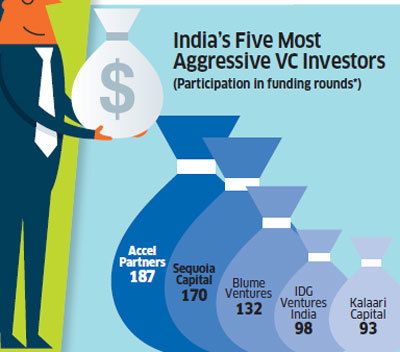 “There is a lot more money in the market, both in volumes and source of capital,” says Sanjeev Krishnan, a partner with PwC. “This is perhaps the first time that entrepreneurs can pick an investor based on the focus of their enterprise and the immediate goals for it.”

For instance, Chinese investors might better push consumer-tech firms chasing massive scale online and on the mobile, whereas Saama Capital in Bengaluru may be able to better steer a breakout consumer brand’s plans.

The challenge for these existing funds is to find a niche and dominate that space,” he adds. Already, the biggest name in the business is showing the way.

Sequoia, the Menlo Park, California-based VC giant that has invested in some 170 funding rounds in India, is reportedly splitting teams to focus separately on early stage and growth stage deals, ET reported on October 18. The marquee fund has been buffeted by poor returns and departure of some partners. 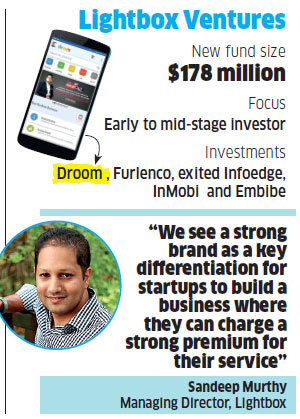 The size of its new India fund, once pegged at $1 billion, has since been scaled down to $675 million. These shifts happen at a time when some of its local rivals are on the move. In the past year, several VCs who have been in operation in India over the past decade have closed new funds to invest here.

While Lunia’s India Quotient is one of these, several others, including biggies Sequoia and Accel, have made fresh commitments in the market. Other investors, including Blume Ventures, Saama, Lightbox, LightSpeed, and Matrix, have all closed new India funds. 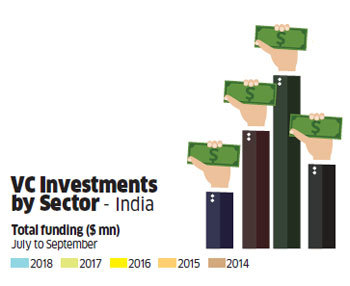 VCs in India traditionally has operated with a measure of defensiveness. Not many digital businesses had matured to provide an IPO-led exit route, and neither had there been many big-ticket acquisitions that showered existing investors with riches. This, combined with the need to assuage LP concerns that India could deliver robust returns, meant even funds known for swashbuckling moves elsewhere preferred safe manoeuvre in India.

“Returns were the biggest concern for us … we had to balance the opportunity to invest here, with historically poor returns,” says Sanjay Nath, co-founder of Blume Ventures, an early stage startup investor in Mumbai.

The conservatism is making way for greater ambition. The sale of Flipkart to Walmart for $16 billion — and the blockbuster returns earned by the firm’s investors — have added fresh impetus to VC investing in India. Then, the emergence of new unicorns (startups valued over $1 billion), including Policy Bazaar, Oyo and Freshworks, has only helped boost the India story. The sizzling growth of ventures such as ShareChat and Swiggy has only helped bolster this narrative. 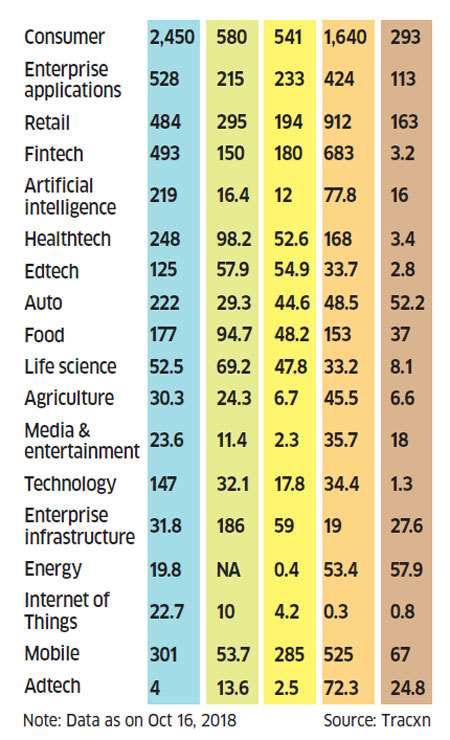 “The Indian startup story has had a massive spike of confidence in the past few months,” says veteran industry watcher K Ganesh, who runs Growth Story, an investment and incubation unit. “The onset of these new funds and their diverse plans will only fuel this story.”

India’s startups, which have traditionally looked up to investments from the US and specifically Silicon Valley-based VCs, are now open to new backers. And, these are coming in the form of Asian investors, especially Chinese VCs and strategic players. They range from tech giants such as Alibaba and Tencent to strategic investors such as Shunwei Capital to funds such as Qiming Ventures, Morningside Ventures, CDH Investments, 01VC and Orchid Asia Group, who are all queuing up to back Indian startups.

Rather than back the same stories centred around e-commerce, fintech and payments, Ganesh thinks these investors will now swim in unchartered waters, hunting for the next big breakout startup star.

“The opportunity to back startups in segments such as vernacular didn’t even exist the previous time around.”

Ash Lilani, the co-founder of Saama Capital, has seen these waves for the past 25 years. He has backed various rounds of India’s startups. The latest round, a $100 million fund, will continue to take contrarian bets as he has in the past, but with one key tweak.

“We will double down on two or three outperformers in our portfolio,” says Lilani, whose funds have backed ventures such as Tutor Vista and Lending Kart and also engineered smart exits from Snapdeal (when its valuation peaked at $6.5 billion, before the firm went into free fall) and Paytm. This time around, Saama will make some investments from this new fund, not only targeting investments in specific outliers, but also making larger bets on these ventures.

Over the past 13 years, Sandeep Murthy, too, has followed the undulation of India’s startup economy closely. In this time, across three funds with LightBox, he has backed successive startups ranging from InMobi to Faasos to Droom. Now, he thinks that with his next $200 million fund, he wants to make nine or 10 investments of $2-10 million each, with an option of also backing later-stage tech-enabled ventures with $25 million.

“We see a strong brand as a key differentiation for startups to build a business where they can charge a strong premium for their service.” This marks a shift in the fund’s focus from tech-led businesses (InMobi, the ad tech venture, and travel-focused Cleartrip), to now looking to build brands from scratch here.

“A lot of things around consumer goods are changing. Alternate distribution channels are exploding and some brands are reaching out to consumers directly.”

For VCs, the challenge isn’t finding and backing promising ventures. Instead, in a market driven by regulatory flux, they need to help their portfolio firms negotiate this uncertain terrain, all the while keeping their eye on the big prize — an outsized return on their investments. Entrepreneurs say that signing up with investors who have run two or more rounds in India helps with these challenges.

“They (Saama) were able to take a contrarian bet when few investors were willing to bet on us,” says Anuj Rakhyan, an investment banker-turned-entrepreneur, who founded Raw Pressery, a cold-pressed juice chain in Mumbai. For these well-established funds, part of the challenge with a new fund is to judge how the market has shifted.

“For VC firms, the era of generalists is over,” says Nath, co-founder of Blume. This means funds like his need to specialise — either focus on business-to-business or business-to-consumer opportunities, or if the fund is large enough, have dedicated teams and specialists for each. Then, there are also two different worlds evolving in the startup ecosystem.

“For VC firms, the era of generalists is over,” says Nath, co-founder of Blume. This means funds like his need to specialise — either focus on business-to-business or business-to-consumer opportunities, or if the fund is large enough, have dedicated teams and specialists for each. Then, there are also two different worlds evolving in the startup ecosystem.

For example, on the consumer-tech ventures, entrepreneurs are often younger and plug for investors from China and East Asia who are familiar dealing with fast-growing businesses of this nature. B2B, meanwhile, remains mostly a preserve of old-school American VCs. As these new norms take hold, entrepreneurs, too, are changing their focus.

“There is a far lesser obsession with having a Sequoia or Accel on their table...this has opened up many more opportunities for other investors,” Blume’s Nath says.

This post was written in ETrise & appeared in the daily on 04-Nov-2018
Share on:
Copyright: rahul@indiaquotient.in
202, Delta, Chemtex Lane, Hiranandani Gardens, Powai, Mumbai.